An evening of sound and movement at 2:1

We could hear the powerful, rhythmic sound of Biba Bell’s six-inch heels striking the floor above our heads before the dance even started. Around 50 people (a good turnout for an avant-garde dance and sound art performance on a Sunday night in Detroit) were all seated in the basement of the 2:1 Gallery, the new sound art laboratory in Eastern Market. People chatted, took pictures and wondered about the dense arrangement of folding chairs; where, exactly, were the dancers supposed to perform? Above us, over the din, the purposeful sound of heels stalking the gallery space from one end to the other signaled an answer. Bell, a choreographer and dancer performing under the moniker Urisov, descended the stairs and announced the performance was about to start. With that, the lights were dimmed and "InGrain" began — upstairs and out of sight.

Read the rest at KnightBlog.
Posted by Matthew Piper at 7:20 AM No comments: 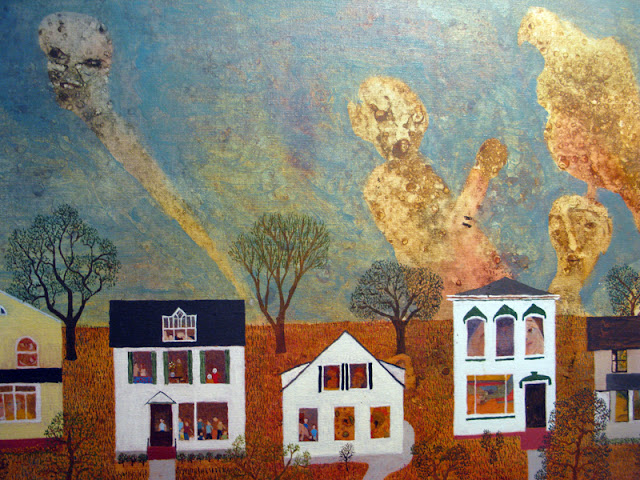 The first piece you’ll see when you check out “Homeland,” the show on view at the N’Namdi Center for Contemporary Art until August 20, is Jother Woods’ astonishing, 52-foot long installation “Plantation House.” The dense miniature world, full of buildings, vehicles, avenues and landscaping constructed mostly from found materials, is a testament to the imagination and talent of its warm, inviting 82-year old creator, who was there in shirt and tie when I visited the gallery.

Woods explained that the piece represents a fictional world based on his personal history and the future he imagined for himself as a young man. The story begins as his life did, in rural Louisiana in 1929, where he shared a single room in a crowded house with four brothers. Woods eventually moved to Detroit and became a sign painter; his imagined self met a different fate, building a trucking empire and the resplendent, titular house that is the centerpiece of the installation.

Read the rest at KnightBlog.
Posted by Matthew Piper at 6:55 AM No comments: 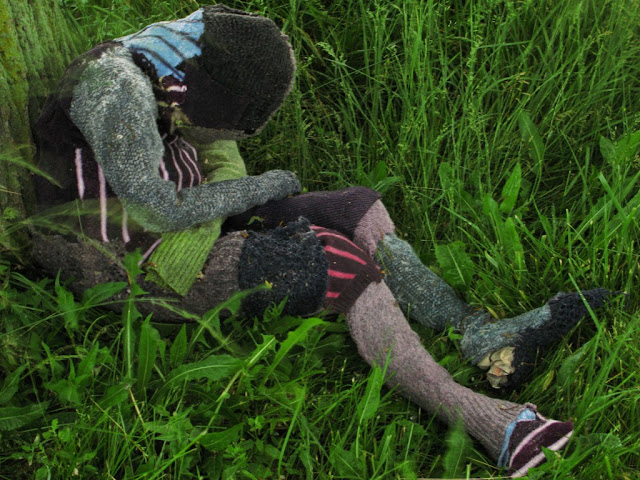 Belle Isle is spectacular. The Detroit island park is home to dense woods, weeping willow-lined lakes, vast fields, dramatic views of the skyline and passing freighters, and some truly inspired architecture. The contemplative tranquility of its natural and man-made beauty also makes it a perfect place to encounter art, as the folks at Access Arts Detroit know. They’ve hosted outdoor art exhibitions on the island for the past four summers. The fifth just opened last Saturday and will only be on view until June 24. I urge you to print a map, head to the island for a few hours, and go looking for art. You’ll find some remarkable work, and, along the way, you’ll have the singular pleasure of spending time on Belle Isle, a place metro-Detroiters are lucky to call our own.

It’s an ambitious show, featuring work by more than 15 artists and stretching from one end of the 1.5 square mile island to the other. A few pieces are well off the beaten path. (Map in hand, I felt like an explorer hunting for treasure as I worked my way around the island.) I recommend seeing it by bike if you can (Belle Isle's streets are some of the few in the city with bike lanes), but a car will work and walking will, too, if you have plenty of time to spare.

Read the rest at KnightBlog.
Posted by Matthew Piper at 9:11 AM No comments: 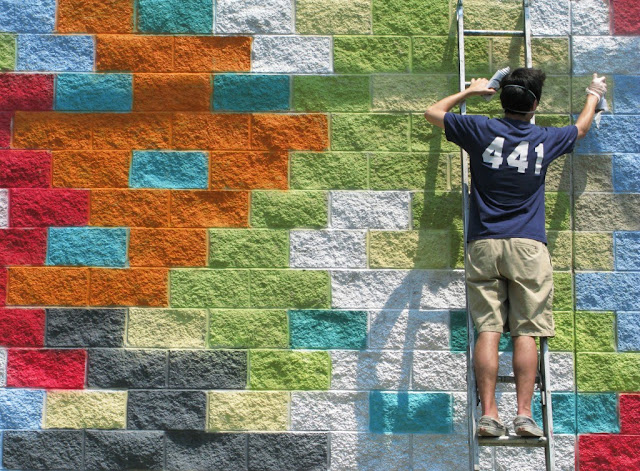 Cedric Tai doesn't think Detroit is a blank canvas. (That controversial metaphor gets tossed around quite a bit these days by people who champion the city’s remarkable creative potential at the expense of its complex present and recent past.) The Detroit-born artist and Kresge fellow does think the city is filled with bad graffiti. To draw attention to the existing beauty of Detroit’s historic brick facades, and to prevent yet more graffiti from marring them, he facilitates the creation of stunning, colorful outdoor murals composed of what he calls “brixels.” (That’s “bricks” plus “pixels,” in reference to the blocky shapes they make, as well as the fact that they're originally generated online.) The community-created murals do more than that, though, as I learned when I pitched in to help create one in Woodbridge last weekend: They also bring people together, and let those of us who aren’t visual artists feel like we are, even for just a little while.

On Saturday, Tai gave paper "keys" to the 20 or so people who showed up to the alley behind the gas station at Warren and Trumbull (the "keys" let us know which bricks to paint which colors). He also gave us a whole lot of spray paint and some very basic instructions. (There was good food and drinks, too, which made the unseasonable heat a little more bearable.) The next few hours’ collaborative work was fun and focusing, and, by the end, we'd created a beautiful piece of public art that gleamed in the afternoon sun.

This was the fifth and final brixel piece that Tai himself will be organizing, as he hands over control to interested community members. I talked with him over e-mail about his work, street art and the future of brixels in Detroit.

Read the rest at KnightBlog.
Posted by Matthew Piper at 5:20 PM No comments: