"In Bloom" at the Susanne Hilberry gallery 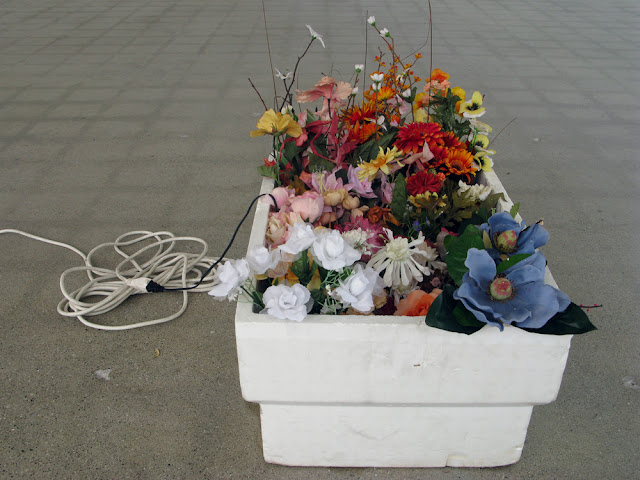 You’ll find no flowers when you visit the Susanne Hilberry Gallery to see “In Bloom,” the four-person show on view there until August 6. Not real ones, anyway. There’s a Styrofoam box full of artificial flowers, watered fruitlessly by a half-hearted burble. And there’s an abundant sense of growing and blooming in much of the rest of the work. But almost none of it is natural growth; the work resolutely inhabits the realm of the artificial, only peeking out to see the natural world from inside material culture. Comprised largely of detritus from the consumerist machine that has come to constitute our environment, the work can only ever refer to nature, though natural ghosts insistently haunt the periphery.

Art referring to nature, of course, is nothing new. What is relatively new, the work suggests, is how very natural the artificial has become. In a 2008 reviewof work by Ivin Ballen, an artist in the show whose pieces include paintedtrompe l’oeil representations of duct tape and plastic bags, Lynn Crawfordmakes a surprising comparison to the mid-19th century landscapes of theHudson River School. But it makes sense; those artists represented the natural environment as they experienced it. For Ballen, today, duct tape and garbage bags are the environment.

Read the rest at KnightBlog.
Posted by Matthew Piper at 5:37 PM No comments:

I saw Modern Garage Movement (also known as MGM Grand) perform in Detroit for the first time in 2009. It was sheer luck, actually, since I’d never heard of them and had only learned about the performance from an overheard conversation at a cafe. Unsure what to expect, I showed up to a warehouse in Southwest Detroit, then in use as artist studios and a performance space by the 555 Gallery, and was directed to a huge, open room several floors up. It was the kind of space that you find scattered throughout Detroit: a gorgeous, creaking, post-industrial vastness, a bit decrepit but steadfastly built to last.

The atmosphere was disarmingly informal. Theatre chairs were arranged here and there, and the company’s three dancers chatted casually with the fifteen or twenty gradually arriving audience members. The dance began with just one dancer, lying on the floor. She spent several minutes there, gasping, heaving her torso, arching her back, and flopping her limbs heavily, dramatizing a profoundly disquieting sense of body horror. From my perspective, I couldn’t see her face, which reduced her form to something anonymous and animal.

The dance, Royce, evolved into a work of purposeful purposelessness, with the dancers at times stalking furiously around the confines of the space. Having been created over the course of a few weeks as a site-specific work, it also became a dance about the space. The dancers moved around the room’s numerous pillars in a way that emphasized the pillars as much as it did the dancers. During one especially breathtaking moment, all of the lights were turned off except those illuminating a single corner of the room. The dancing continued, now as a supporting, exclusively auditory phenomenon. (The dance had no recorded soundtrack, only the dancers’ footfalls and breathing, and the regular, rhythmic splash of passing cars driving through puddles.)

Royce was playful, too; at one point, the dancers offered the audience beer and bags of chips. At another, they started rolling objects in our direction: balls, industrial spools, tires. This level of audience acknowledgment and involvement is essential to MGM Grand’s work. Also essential is an experiential investigation of space, an interest in taking dances on the road and letting them change along the way, and a tendency to perform in unexpected places.

The company will be bringing its singular performance style to the Museum of Contemporary Art Detroit this Friday, July 15. They’re dancing Nut, a 2010 piece informed, in part, by the classic Motown female trio (and featuring Motown music, modified by MGM collaborator R. McNeill). Nut was conceived at MIT, developed in Detroit, and premiered in New York at The Kitchen. After Friday’s performance, it will continue to tour on the east and west coasts.

MGM Grand originated in San Francisco and its three choreographer-dancers, Biba Bell, Jmy Leary, and Piage Martin, live across the country. Bell currently lives in the Detroit enclave of Hamtramck, and I interviewed her after seeing a recent Detroit performanceshe choreographed as Urisov, a moniker used to identify her solo work, apart from MGM Grand. (Urisov is pronounced your eyes of, and is a reference to Part IV of Hymmnn, the concluding section of Allen Ginsberg’s long poem Kaddish).

That performance was at the 2:1 Gallery, a temporary sound art space in Detroit’s Eastern Market district. It included a dance (InGrain) during part of which the audience sat in the basement and listened to the dancers performing upstairs, as well as a sound piece (Four Corners) by Gregory Holm and Jeffrey Williams that included a vibrating tambura, a droning, electronically modified piano, and two singers vocalizing wordlessly into the rooms’ corners. I asked Bell about her distinct creative personae, her influences, and the approach MGM Grand takes toward making and performing dances.

Read the rest at Bad At Sports.
Posted by Matthew Piper at 9:11 AM No comments:

Where we end and nature begins 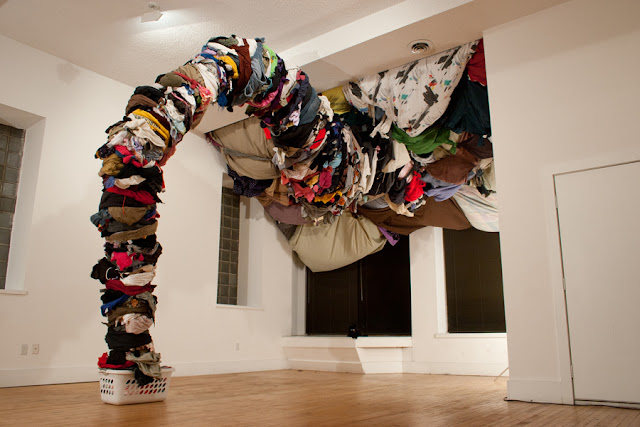 There’s just one day left to view “Prime Candidates,” the fascinating show currently up at 2739 Edwin in Hamtramck. Curator and gallery owner Steve Panton considers the work on display part of Detroit’s “dirtgeist,” a movement he associates with trash (plastic bags, especially) and nature. In it, participating local artists Scotty Slade and Andrew Thompson, as well as the Canadian duo Duke and Battersby, all pose intriguing questions about the points of intersection between human domesticity and the natural world.

Read the rest at KnightBlog.
Posted by Matthew Piper at 6:45 AM No comments:

A different kind of theme park 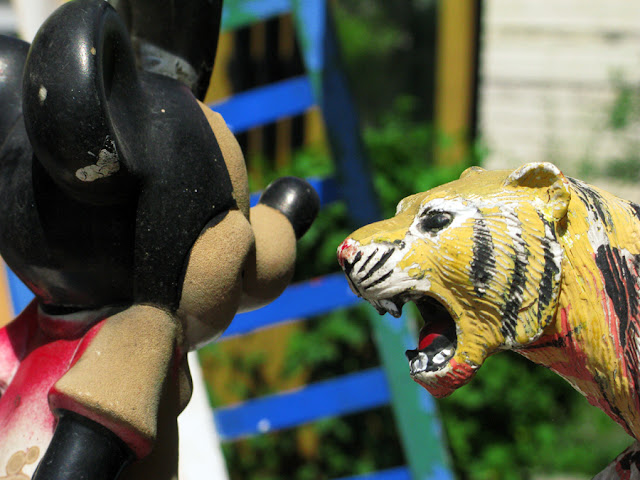 I was glad I took time this Independence Day to explore Hamtramck Disneyland. That's the informal name of a legendary folk art installation that covers a residential backyard and two small garages, reaching, improbably, at least two stories into the air. What better way to celebrate the holiday than a stop in Michigan’s most ethnically diverse city, a tiny enclave of Detroit, to see a work of crowded, kitschy Americana made by a retired Detroit autoworker originally from Ukraine? Turns out Hamtramck Disneyland is a lot more than crowded and kitschy (though it is, gloriously, both of those things); it’s also a remarkable technical achievement and a compelling and joyful exploration of the US and all its messy contradictions.

Dmytro Szylak, who is now in his 90s, began the piece in 1992 and continues to add to it. It’s a dense but carefully arranged assemblage of windmills, toys, fans, propellers, art and religious iconography from various cultures, carved figures, model rockets, lawn ornaments, a massive model airplane, a couple carousels and several Santa Clauses (including one that’s gleefully riding in a helicopter). It has many moving parts. It’s crazy and overwhelming, described as both “Disneyland on acid” and “the physical embodiment of happiness” onYelp. It’s also an intricate structure and a remarkable feat of engineering (by which I mean it doesn’t fall down, even though it looks like it should).

Posted by Matthew Piper at 5:33 PM No comments:

Soul of a city 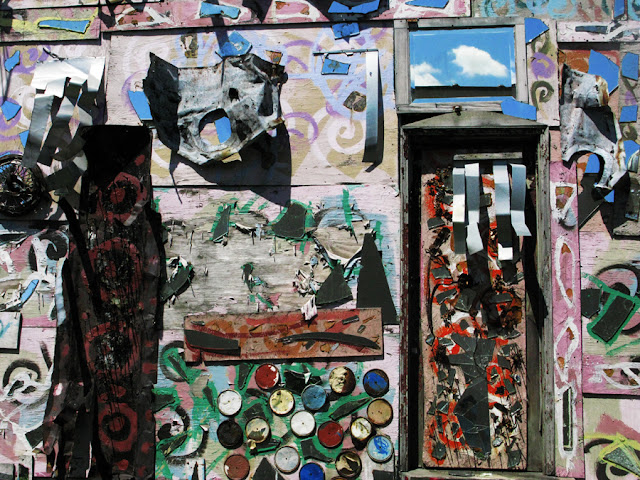 Spending time with Olayame Dabls’ public art is in some ways essential to understanding Detroit’s recent history. In his hands, the rusted, discarded and broken bones of industry cohere into beautiful, monumental forms that address the racism, deindustrialization and abandonment that have wreaked such havoc on the city and its residents. Colored (and somehow safeguarded) by vibrant visions from Africa, the work, which can be found on adjacent plots of land overlooking Interstate 96 on the city’s near west side, expresses difficult truths, but is also a wonder and joy to behold.

Read the rest at KnightBlog.
Posted by Matthew Piper at 6:37 AM No comments: