Making the grid feel lived in: a conversation with Placement about 'Thanks For the View, Mr. Mies' 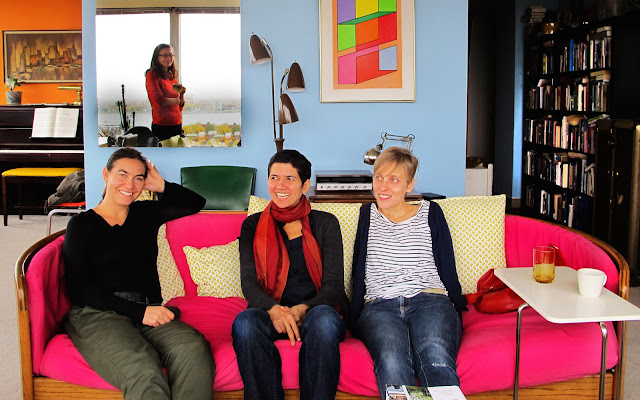 The new book Thanks for the View, Mr. Mies: Lafayette Park, Detroit is something unexpected: an architecture book that’s as much about people as it is about buildings. In the case of Lafayette Park, the buildings tend to hog the spotlight, as most of them were designed by Ludwig Mies van der Rohe. (The neighborhood contains the largest collection of his work in the world.)

Built between 1958 and 1965, Lafayette Park, just east of downtown Detroit, is both a local and national anomaly: an urban renewal project that was actually, by most measures, successful, it has remained racially diverse and economically stable since the beginning. The Mies-designed portion of the development includes 186 cooperatively-owned townhouse and courthouse units made of glass, steel, and brick, as well as three aluminum and glass high-rise apartment buildings: the monolithic Pavilion and the twin Lafayette Towers. Over the years, as designed, the neighborhood has remained both affordable and economically mixed. The townhouses are largely inhabited by middle-class homeowners, while the glass-walled towers provide an unparalleled urban living experience for working class Detroiters and young professionals.

Thanks for the View, published last month by Metropolis Books, has been a hit in Detroit (and elsewhere). Its humanism is refreshing, as is the unassuming way it approaches its subject — namely, what it’s like to live here, and how people actually inhabit these idealized spaces over time. It contains interviews with and essays by current and former residents, abundant photos (including a series by Corine Vermeulen, previewed in the New York Times in 2010, of residents posing in their distinctively decorated homes), and a host of surprising, digressive features, like several illustrated pages depicting the few dozen bird species that call the park home. It’s at times funny, poignant, obsessive, revelatory, and beautiful. The experience of reading it is a singular pleasure, and, as I enthused last month, I’d recommend it to anybody.

The book’s editors are Danielle Aubert, Lana Cavar, and Natasha Chandani, who call themselves Placement. They are all graphic designers who met in grad school at Yale. Aubert lives in Lafayette Park, originally in Lafayette Towers and now in a townhouse. Cavar is based in Zagreb, Croatia; Chandani’s in Brooklyn. Thanks for the View, Mr. Miesis their first professional collaboration.

I live in Lafayette Towers, and when Thanks For the View came out locally in mid-October, Aubert, Cavar and Chandani were all in Detroit and came up to my apartment for a conversation about making it. Diana Murphy, their publisher from Metropolis, also joined us, and was generous in providing some valuable context for the project.

It was a rainy, cloudy morning, so I was able to keep all the blinds open and show off the view of the skyline and the wind-whipped Detroit River. (I do in fact thank Mr. Mies for the view, in all seasons, daily.) We drank tea, laughed a lot, and chatted about the book and the neighborhood for about an hour. An edited transcript of our conversation follows, divided into three sections: Content, Design and Printing/Publishing.

Read the rest at Bad At Sports.
Posted by Matthew Piper at 6:05 AM No comments:

In his 2008 bestseller In Defense of Food, Michael Pollan makes a number of salient points about what we eat. For one, he reminds us that food is, in fact, about much more than eating. It's also "about pleasure, about community, about family and spirituality, about our relationship to the natural world, and about expressing our identity."

Pollan goes on, memorably, to define food by contrasting it with the "edible food-like substances" (Twinkie, anyone?) that constitute the contemporary Western diet: "lots of processed foods and meat, lots of added fat and sugar, lots of everything -- except vegetables, fruits, and whole grains...I contend that most of what we're consuming today is no longer, strictly speaking, food at all, and how we're consuming it -- in the car, in front of the TV, and, increasingly, alone -- is not really eating, at least not in the sense that civilization has long understood the term." But, he continues, "We are entering a postindustrial era of food; for the first time in a generation it is possible to leave behind the Western diet without having to leave behind civilization."

For this month's diary entry, we're considering how these various truths play out in Detroit, where gardeners, farmers, activists and socially conscious entrepreneurs battle daily against the alluring ease and convenience of fast food and liquor store fare. According to the comprehensive City of Detroit Policy on Food Security, prepared by the Detroit Food Policy Council (that's essential reading if you're interested in this subject), "In the city of Detroit, the most accessible food-related establishments are party stores, dollar stores, fast-food restaurants and gas stations. Although most neighborhoods may have a grocery store within a 'reasonable' distance, the quality and selection of food items is exceedingly lacking."

The policy, officially adopted by City Council in 2009, goes on to elaborate how this problem is exacerbated by lack of access to transportation, and how it results in malnutrition and chronic health conditions among the population. There is further discussion of the troubling lack of black control over the food system in a majority black city, as well as a vigorous defense of urban agriculture, an old tradition here, as a vital component of the quest for food security.

The Food Security policy points the way toward a future in which all residents in Detroit have access, "in close proximity, to adequate amounts of nutritious, culturally appropriate food at all times, from sources that are environmentally sound and just." An in-depth investigation into how Detroiters are working toward that goal would be a book-length subject in itself. As usual, I'll hone in on one or two developments.

Read the rest at Model D.
Posted by Matthew Piper at 9:22 AM No comments:

It's an exciting time in West Village. The cozy, dense, architecturally rich neighborhood just west of Indian Village is seeing a much-needed retail boom at the same time it's getting some attention as an urban gem, glittering with character, history, and potential.

Following the massively successful pop-up Tashmoo Biergarten, which opened last fall and continues to introduce the neighborhood's distinct charms to vast numbers of craft beer enthusiasts (and the people who love them), two more pop-ups made their mark last month: cafe and bakery Coffee and (______) and locally-designed clothing boutique PRAMU. Both opened in the Parkstone, a solid, 11-story brick building built in 1925 with apartments on top and (previously vacant) retail space on the ground floor. Next Spring, four new (permanent) establishments will be opening in the same building, and each offers a different reason to celebrate: Detroit Vegan Soul, Red Hook, Tarot and Tea, and Craft Work. (Read all about them here, and take a look at the spaces they'll be occupying here.)

For residents, these new neighborhood destinations, made possible by a partnership between the Villages Community Development Corporation and the REVOLVE program of the Detroit Economic Growth Corporation, will be more than just places to eat, drink, or have your cards read. As PRAMU and Coffee and (______) demonstrated, they'll be valuable gathering places, places to get to know your neighbors, and reasons for friends from other parts of town to visit. They'll also be places to get to by foot, and in a neighborhood that residents commonly refer to as "walkable without anywhere to walk to," that's a big deal.

Read more at Model D.
Posted by Matthew Piper at 9:03 AM No comments: