So I recently read Moby-Dick for the first time, and for a minute there, I couldn't stop talking about it. Reading Moby-Dick is an event; if you enjoy the experience (and maybe even if you don't), you feel compelled to go on about it, all the time, to anybody who will listen. At least that's what I wanted to do.

Borges called Moby-Dick an "infinite novel." As such, the book that's so famously about obsession easily becomes an obsession -- a satisfyingly communal one, too, since so many other people have been similarly gripped. The cultural record surrounding this book is massive, boundless. You could spend a lifetime just reading what other people have written about it, considering the art it's inspired.


And if you become obsessed with Moby-Dick, you end up in fantastically good company. You suddenly belong to the same club as people who are far more brilliant and talented than you (and who are obsessed in a way that makes your own fascination look like disinterest): Laurie Anderson, say, who designed a multimedia performance inspired by the book (here's a lovely song from it), or Matt Kish, who imaginatively illustrated every page of it, one day at a time, for 552 days in a row.


I was a little surprised to learn about Frank Stella's contribution to the history of Moby-Dick-inspired art. The one-time minimalist spent the better part of the 1980s and '90s creating more than 135 abstract works, each titled after a particular chapter of the novel. This staggering body of work includes huge metal reliefs, prints, sculptures, and murals.

After finishing Moby-Dick and learning about Stella's related work, I checked out a great book about his series (thanks, inter-library loan!) called Frank Stella's Moby-Dick: Words and Shapes by Robert K. Wallace.

Wallace is a Melville scholar, but also an attentive visual art critic and champion of Stella's series. I don't think I've ever seen a book quite like his, which dazzingly marries literary analysis to art criticism.

I didn't finish the book and I don't have it in front of me, so forgive my bungled and bastardized version of the thesis that Wallace advances early on, but it goes something like: the Moby-Dick series liberated Stella from pure abstraction, enriching and enlarging the scope of his work (and reflecting the expansiveness of Moby-Dick) by facilitating its evolution into something closer to figurative abstraction. Stella's series doesn't illustrate Moby-Dick (like Rockwell Kent did in 1930) and it certainly isn't beholden to the novel (you could easily see any of the pieces and never associate them with Melville or Ishmael, Ahab or the white whale); instead, the two sort of swim alongside each other. The series establishes a visual language that can both be applied to Moby-Dick and convincingly shown to have been drawn from the world of the novel (that's Robert Wallace's job, which he does with systematic gusto), but that language is, at the same time, all its own.

The pieces in Stella's series are scattered throughout the world. (Wallace's book is your best chance to get a comprehensive sense of them.) Having recently scheduled a trip to Chicago, I was delighted to learn from the book that (at least) four of the pieces currently live there: Loomings and Knights and Squires, which hang on opposite walls of a postmodern skyscraper's soaring, spartan lobby, and, just a few blocks away, Postscript and The Town-Ho's Story, which tower, monstrously and commandingly, in the lobby of the Miesian Metcalfe Federal Building.

I dragged my willing husband and a patient friend around to see all four while we were checking out other pieces of public art downtown. We found 181 W Madison first, the 1990 skyscraper that houses the late '80s reliefs Loomings and Knights and Squires. (According to Frommer's Memorable Walks in Chicago, "In planning this building, the developers specifically asked architect Cesar Pelli to design the five-story, 100-foot long marble lobby as a gallery to display Stella's two works.") Upon entering the lobby, I was struck by the scale of the things; they're huge! I guess I knew that when I read about them, but it surprised me nonetheless. Here they are:

I found these two beautiful and beguiling. The explosive, tumbling buoyancy of Knights and Squires and the elegant balance and contrast of Loomings did not prepare me, however, for the industrial darkness, might, and confusion of the 23-foot-tall Town-Ho's Story and its small companion, Postscript.

These chaotic and difficult pieces were installed in the clean, modernist lobby of the Metcalfe Federal Building in 1993. Robert Wallace explains that The Town-Ho's Story is comprised primarily of thirteen one-ton pieces, shipped to Chicago on two flatbed trucks and installed (by crane) only after an upper window panel was removed to accommodate them.

This piece is not exactly universally loved. Wallace reports that during the week of its installation, employees of the building circulated a petition to have it removed. This 2003 commentator referred to it as a "wholly abysmal...monstrosity," a "misshapen lump of metal" that "still tastes bad."

I said earlier that I don't have Wallace's book in front of me, but I do have a few photocopied pages about these particular pieces. He refers to The Town-Ho's Story's "vertical aspiration" in terms of the "whale shape becomingly increasingly ascendent over the human shape," both in the novel and the trajectory of Stella's series. "This sense of an impending, stupendous mass is what closely relates The Town-Ho's Story to Melville's novel...and to the most characteristic appearances of Moby Dick himself." He goes on:


From the human point of view, The Town-Ho's Story can be viewed as a wreck, as the residue of a not entirely pleasant story. From the whale's point of view, it can be seen as a survival story, even as the resurrection of a crucified or mutilated shape. The arrival of this monumental sculpture near the end of the series is comparable to that of Moby Dick himself near the end of the book, when the undulating two-dimensional surface of the sea that has served as the liquid, spatial ground of the entire story is suddenly disrupted in an entirely new way, in the form of a living creature whose presence changes the rules of the game, and the relative strength of the players.

I found The Town-Ho's Story wholly absorbing -- sublime, even. It soars at the same time it looms. It offers a startling and engaging variety of textures that echo (and expand upon) the large-scale industrial works of John Chamberlain while simultaneously conjuring the biological, the animal -- the cetacean. It's a near-infinite sculpture for an infinite novel. In it are ragged landscapes, a striking portrait, terror, violence, power, even peace. Here are my best detail shots: 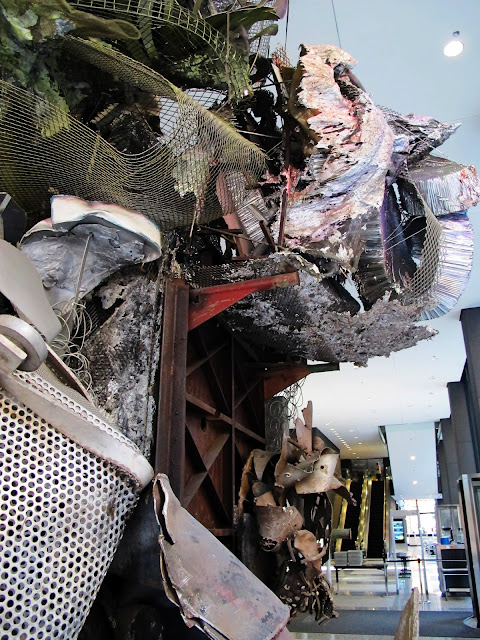 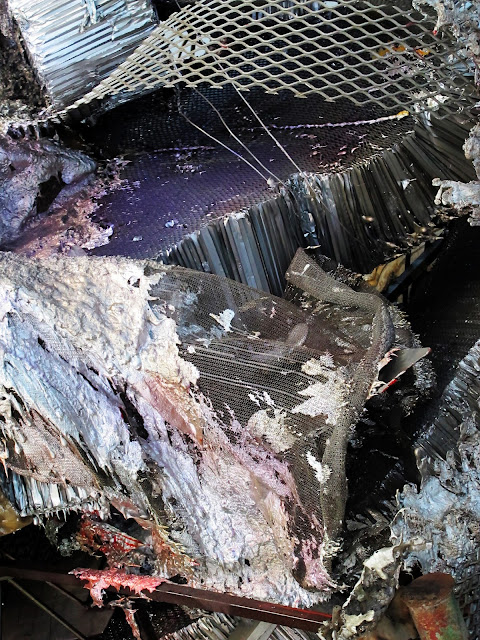 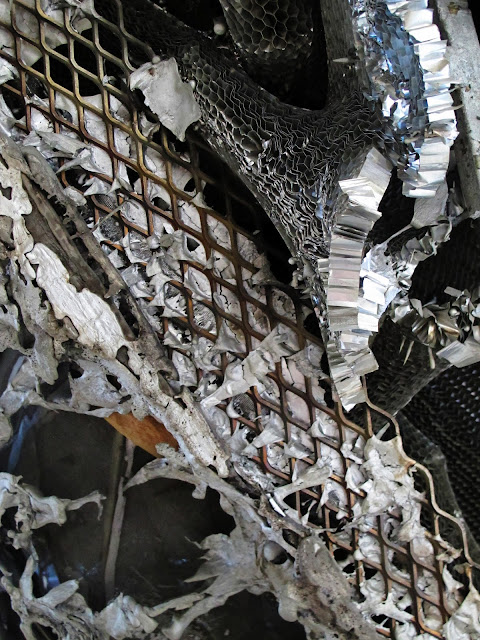 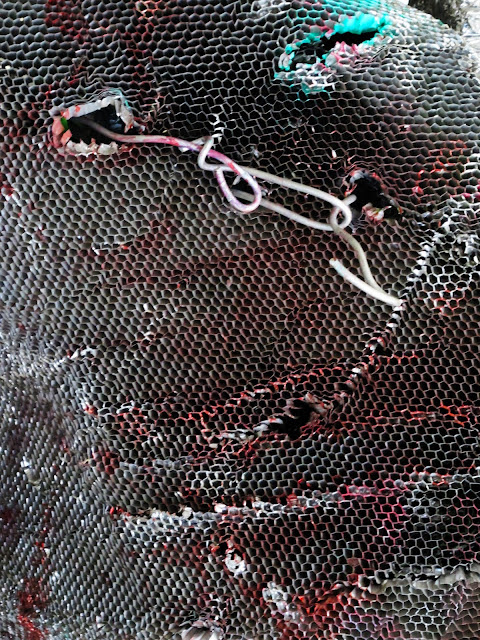 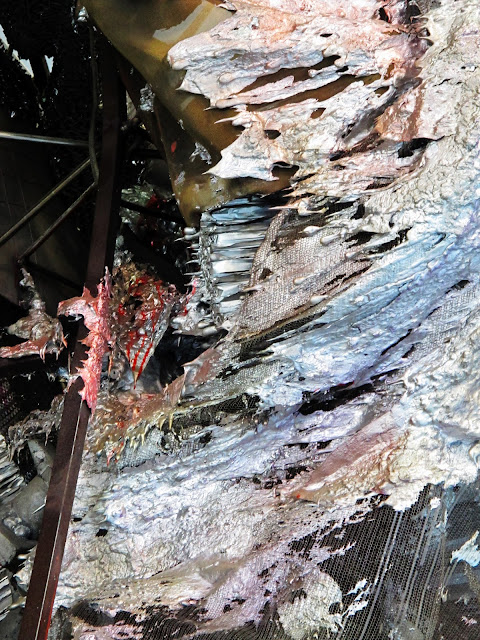 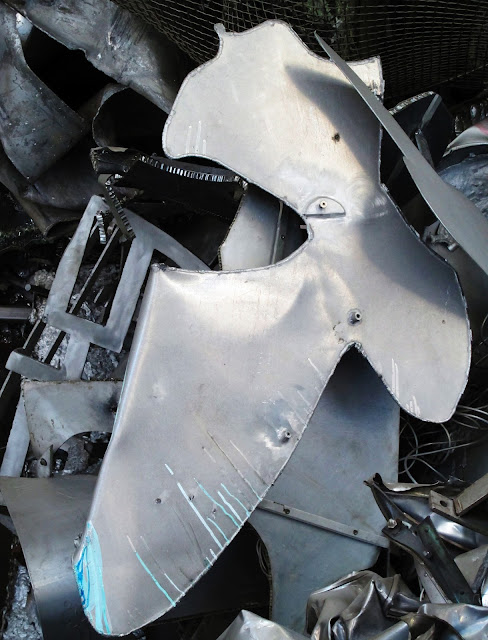