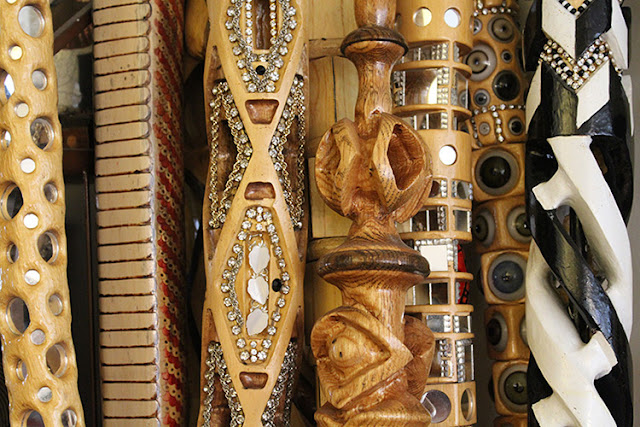 David Philpot is an antenna, finely tuned to subtle frequencies. He listens carefully, receiving transmissions from as far away as West Africa, and from as nearby as God or the wood in his hands. His primary medium, fittingly, is the staff, an energizing rod that joins the earth to the sky via the human being who wields it.

Long before he ever considered himself an artist, the 30-year-old Philpot heard a voice call his name, leading him, amazed, to an oasis: a grove of trees in a Chicago housing project. A week later, Philpot, who had never abandoned his childhood habit of gathering and carrying sticks, and who had recently admired Charlton Heston’s staff in The Ten Commandments, woke in the night with a mission: to chop down one of those trees, and make from it a staff of his own. When it was done, he called it Genesis (1971), an apt title for the first of more than 350 staffs he has made in the 45 years since.

Read the rest at Essay'd.
Posted by Matthew Piper at 9:45 AM

I'm a Detroit-based writer, editor, and librarian-at-large. I'm particularly interested in modern and contemporary art, architecture, and urbanism.
I'm the editor-in-chief at Essay'd, where we publish short, illustrated essays about contemporary Detroit artists. My work has also been featured in Curbed, Detroit Research, Infinite Mile, KnightArts, Model D, and the second edition of Thanks For the View, Mr. Mies.
I'm currently working on a book documenting and assessing the ongoing impact of the socially engaged abstract public art that proliferated in Detroit in the early 1970s.