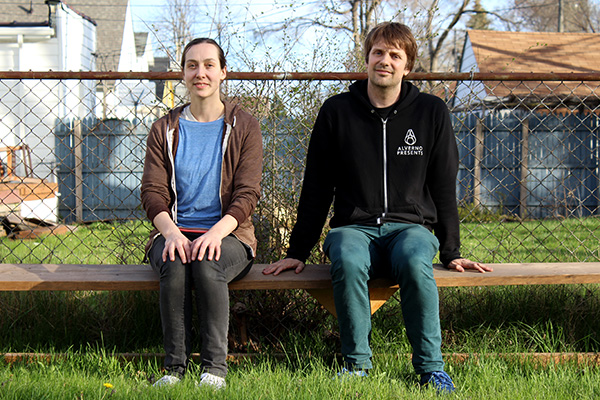 The place that Detroit-based experimental performance ensemble The Hinterlands calls home is, in fact, a home. Or at least it used to be.

Play House is a formerly vacant, 1,000 square foot corner house on a dense, residential street in Banglatown, the Detroit neighborhood that borders Hamtramck to the northeast. Built in 1920, it was converted into a small rehearsal and performance space by Power House Productions in 2013 as part of their creative stabilization work there.

It's fitting that "The Radicalization Process," the Hinterlands' new performance, begins in the basement of that house. Because this work, like just about everything else they've done in Detroit, is suffused with a sense of subterranean richness.

The vivid, boundary-stretching productions the Hinterlands creates are wonders to behold; they're beautiful, funny, and technically accomplished all at once. But they also reflect an unusually profound engagement with their subject matter, as well as a long and intensely physical creative process. The result is a theatrical experience like no other -- something that's alive, intimate, multilayered, and that reverberates long after each performance has ended.

The Hinterlands take an exploratory approach to creating work. They conduct extensive research into subjects they're interested in, incorporate that research into their ongoing physical training, and see what emerges over time. In their previous productions "Manifest Destiny," "Dreamtigers," and "The Circuit," they took on the Wild West, magical realism, and vaudeville, respectively. At the center of the new work is a timely question: what drives people to become political radicals?

They root their investigation of this theme in late '60s/early '70s American left-wing extremism, and explore it in typically kaleidoscopic fashion. The world of "The Radicalization Process" includes, among much else, a bomb that's being built in a Detroit safe house, a fanatical Method acting coach, and a rehearsal for a production of "Antigone," all set against the background of the Vietnam War. A live score is performed on an analog synthesizer, a briefcase turntable, and ringing wine glasses.

All of that takes place on the first floor of Play House. But before you, the audience member, see or hear any of it, you start in the basement, where you're invited to spend time rifling through a mysterious archive.

The Hinterlands' co-founders, Richard Newman and Liza Bielby, take an approach to performance-making that is indisputably their own, but also informed by a handful of notable traditions. Moving to Detroit from Milwaukee in 2010, they've taken a long, winding path to get here, and picked up a few things along the way.

Read the rest at Model D.
Posted by Matthew Piper at 9:49 AM