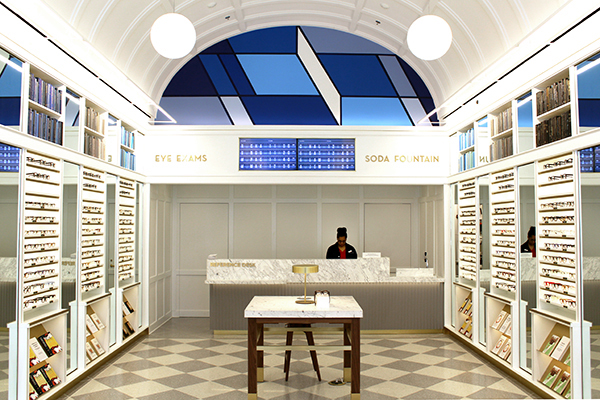 The mood was festive on a bitter, wintry night in early December when a few hundred people crowded into a spiffed-up downtown storefront to inaugurate the opening of Detroit's new Warby Parker, an innovative eyewear company known for selling affordable frames in hip, vintage styles.

A handsome new shop selling something both useful and relatively inexpensive is reason enough to celebrate in downtown Detroit. But it wasn't just the promise of retro eyewear in a recently revamped building that brought people out into the cold that evening. In designing their latest store (one of about 50 nationwide), the New York-based Warby Parker invited 82-year-old Detroit artist David Rubello to reimagine his 1973 mural "Color Cubes"—an iconic public artwork that was lost in 2014 when, after decades of deterioration, it was painted over to make room for a billboard.

"Color Cubes," which once adorned an historic high rise just two blocks from Warby Parker's new Woodward Avenue home, had been created under the auspices of Living With Art, an ambitious early 1970s urban renewal project organized by New Detroit, Inc. that resulted in the creation of some 12 public murals and sculptures throughout the city. At a commanding 50 x 25 feet, its scale befitted the lofty ambitions of its commissioners, who believed that public art could help improve quality of life in Detroit and stem the rising tides of disinvestment and decline.

If "Color Cubes" was Rubello's great open-air symphony, a monumental work of vivacious color and geometric play, the new Warby Parker mural—which the artist calls "Blue Echoes"—is more like a piece of chamber music. Rendered in white, black, and seven shades of blue, it measures just 5.5 x 14.5 feet. But, as one attendee put it the night of the opening reception, "It makes the place."

Read the rest at Model D.
Posted by Matthew Piper at 7:02 AM No comments: