The view from here

I am delighted to share the news that the second edition of one of my very favorite books, Thanks For the View, Mr. Mies, has just been published—and that it features a brand-new preface by yours truly! 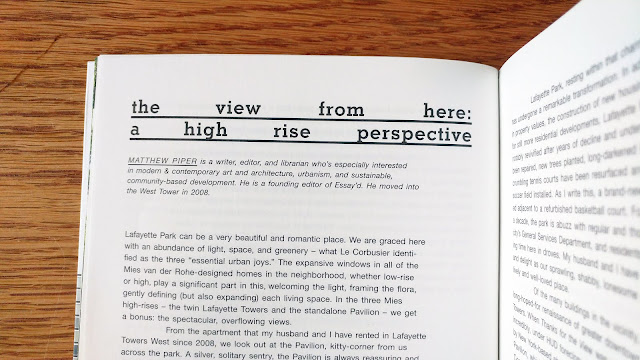 TFTVMM, originally published in 2012, is all about life in the Mies van der Rohe-designed townhouses and apartment buildings in Detroit's Lafayette Park neighborhood, where I've lived since 2008. It is notable for being a very human architecture book; it is, in fact, a book about people, all kinds, and how and why they inhabit this unique, idealized neighborhood. It is one of a kind: obsessive, funny, critical, digressive. Kaleidoscopic. 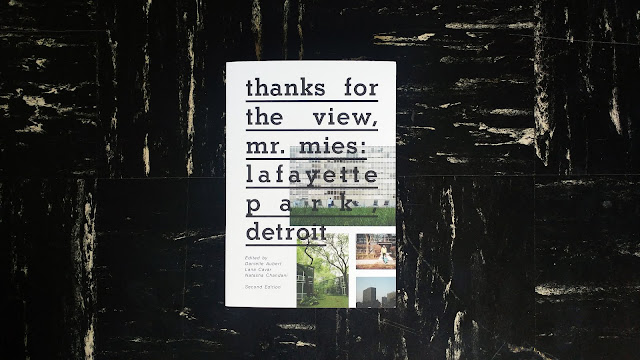 An important dimension to community life in Lafayette Park is the fact that the population here has long been economically and racially mixed. This is, of course, a rare phenomenon in a neighborhood of buildings designed by one of the world's most influential modern architects. But it's a phenomenon that gets remarkably close to the real objectives of modernism, which sought to improve society by housing the masses, not just the elite.

When TFTVMM was first published in 2012, Lafayette Park was something of a well-kept local and national secret, and Detroit was on the cusp of major economic upheaval. In the years since, the neighborhood's profile has grown, along with greater downtown's economic fortunes, and things have changed here considerably. Property values, prices, and rents are all up, and suddenly, the neighborhood feels like a hot commodity.


For my new preface, I was tasked with describing how life in the neighborhood's three high rises, in particular, has changed since 2012. Two other new pieces, one by the book's editors—Danielle Aubert, Lana Cavar, and Natasha Chandani—and the other by the writer Marsha Music, look at changes in the neighborhood more broadly.

When the book first came out in 2012, I had the opportunity to review it and publish an in-depth interview with Danielle, Lana, and Natasha. (That interview, incidentally, remains one of my favorites I've ever done; those three have such a lively and infectious energy.) Though Danielle lives in the neighborhood, I hadn't meant her until then, and after our conversations, we were both sorry that we hadn't met in time for me to contribute to the book, which includes a number of pieces by various writers living in the neighborhood. So it was with profound gratitude and delight that I accepted her invitation to write something for the second edition.

Nonetheless, this was a challenging assignment, describing flux while living among it. (While participating in it.) I think I went through more drafts of this essay than any I've ever written, struggling to get the tone right—to record accurately both fact and feeling, and to find the proper balance between the two. With the help of several wise and generous editors, I think I got fairly close in 2000 words to achieving what I set out to do, but as I told Michel recently, I have had a hard time letting this essay go; I continue to revise and rewrite it in my head as I go about daily life here, talking with neighbors, noticing new changes, and sorting through my various responses to them. I'll probably be mentally revising it for as long as I live in the neighborhood.

But despite my feelings to the contrary, "The View From Here" is in fact very much done! And now it's out there, and I greet its publication with deep gratitude for the opportunity to help tell the story of one of my favorite places, the place I am fortunate to call home.

If you're inclined to pick up a copy, you can order the book directly from Distributed Art Publishers or from Amazon.