On a sunny Saturday in mid-March, shortly before the world as I knew it came to an end, I was browsing Dennis A. Nawrocki's invaluable guidebook Art in Detroit Public Places when I happened upon a pair of interesting-sounding public artworks: Crystal Transformation (1976) by David Barr (1939-2015) and Glacial (1977) by Ivy Sky Rutzky (b. 1948), both installed on the campus of Macomb Community College in Warren.

Nawrocki describes Crystal Transformation as a "highly geometric," nature-inspired sculpture whose "nine units...grow larger and change color...as they move in a broad arc from the bottom to the top of a small hill."

Glacial, meanwhile, is an "audaciously simple sculpture" that "consists of two [polished] quarter-inch stainless steel planes" installed flush in a lawn, "one essentially rectangular (five by ten feet) and the other triangular (three feet per side)," that "[suggest] airborne views of glacial lakes, or pools of standing or frozen water."

Drawn as I am to most things minimal, environmental, and geometric (ah, the '70s: a country I never got to visit in person but where my sensibility has apparently taken up permanent residence), I asked Michel if he wanted to go look at them and he said, without missing a beat, "Yes!" (What can I say? I married the right person.)

We drove 20 or so miles to the sleepy, near-deserted campus, parked, and began to walk to the central square, where we immediately spied Crystal Transformation: a commanding and elegant intervention in the landscape. 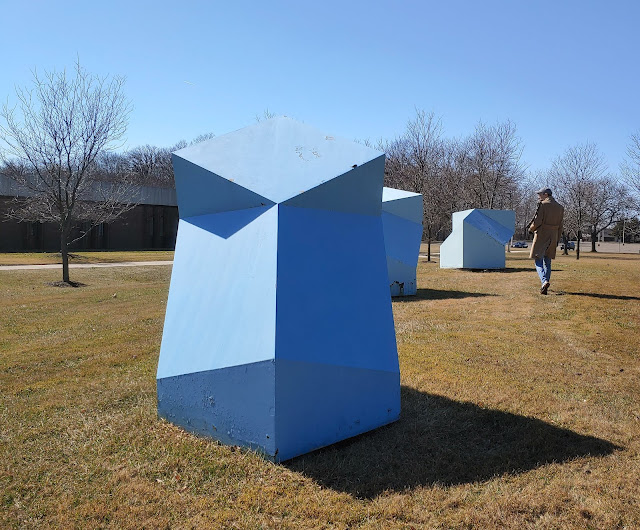 Considered as an abstract thing, Barr's sure sculpture is lively and entertaining, with a shifting play of sun and shadow on its faceted surfaces. Considered as a site specific work, the "transformations" depicted take on added meaning, even a certain poignancy, reminding the viewer-in-motion that to learn is to take part in a gradual change process. 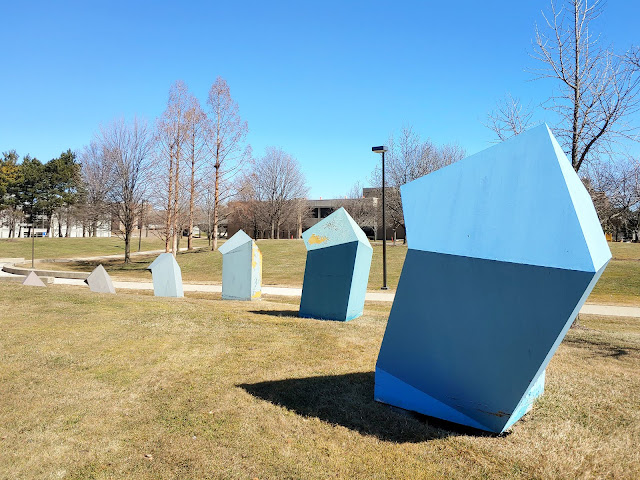 Regrettably, as with so much aging, aspirational public art in metro-Detroit, Barr's sculpture has been neglected, and shows signs of deterioration. Artist Ryan Standfest, Barr's onetime student at Macomb Community College and later his studio assistant, expressed his frustration when he told me, "I wish MCC would take better care of that piece. I know [Barr] provided the school with all the correct colors, paint formulas, sources. I think they covered it with exterior household paint at some point...."

As deserving as Crystal Transformation is of better care, it at least resists obsolescence, for now, by virtue of its monumental presence, its powerful vertical and horizontal thrust.

The same cannot be said for "audaciously simple," earthbound Glacial. We figured it would be harder to spot, since Nawrocki had noted in the third edition of Art in Detroit Public Places (published in 2008) that, "over the years the grass has overgrown the edges of the steel plates, noticeably reducing their visibility."

We ventured over to the lawn where we thought it ought to be and caught a glimpse of its two sections, by now so neglected as to be nearly invisible. 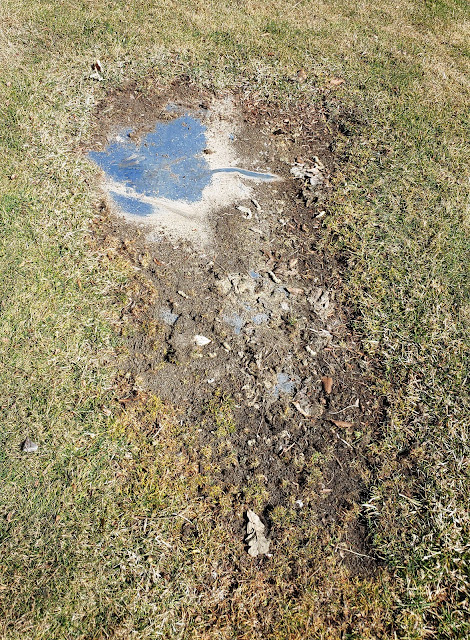 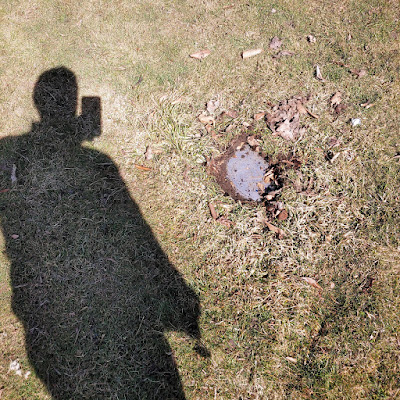 Filled now with a real curiosity to see what this work actually looked like, we began to clean off the larger panel with our feet, scraping off the layer of dirt and mud. We could tell that there was much more of the panel beneath the surrounding sod (and there was still the whole second section to contend with) but without tools, cleaning products, or a way to transport the sod from the site, we thought to leave well enough alone for now. Content that the sun was touching more of Glacial than it had the day before, we departed to explore the rest of the campus, planning to return at a later date to finish the job. 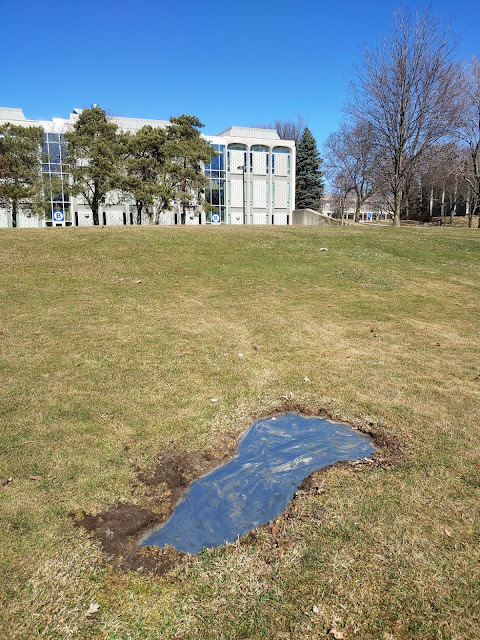 On our way, we encountered another figure in the otherwise unpeopled landscape, a friendly man walking his dog who had seen us working over the steel plate with our feet and wondered what we were up to. We showed him the page in the book with the historic photo of Glacial in all its simple splendor; he seemed interested, saying he walked his dog on the campus often and had no idea there was art there.

We parted ways, and Michel and I took some time to explore the rest of the central campus, built in 1965, which surprised us with its sensitive, orderly, mid-century beauty: an unexpectedly neoclassical center of learning. (I grew up in Macomb County and took a class at MCC in high school, but had only been familiar with the school's boxier, blander, more northerly campus in Clinton Township.) 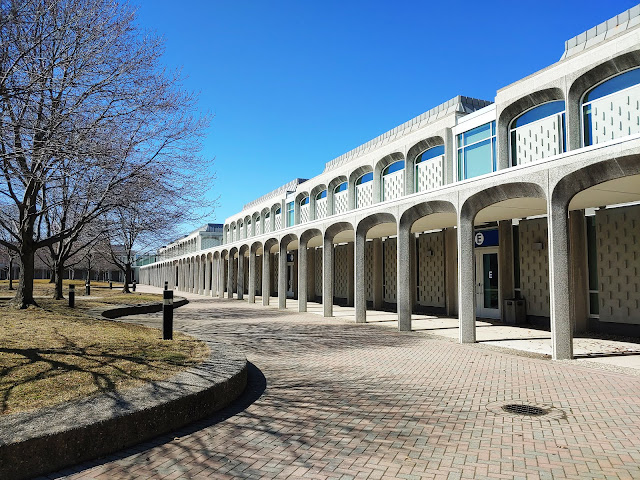 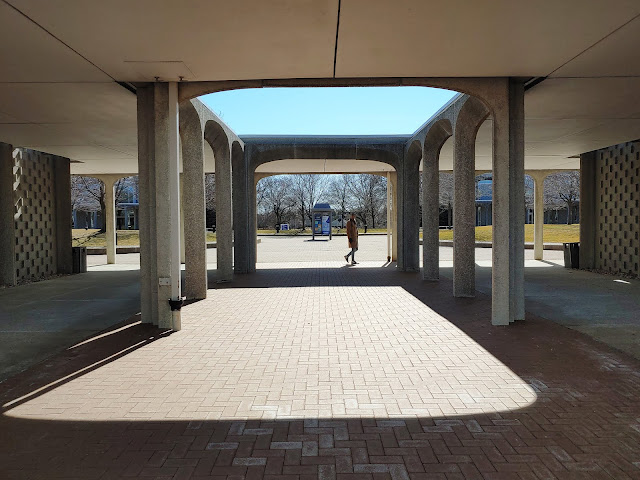 After our exploration, as we prepared to leave the campus, we encountered the man with the dog again, now with a few companions. "We cleaned off a LOT more of that art!" he exclaimed with a big smile. Naturally, we went back to check out their work and, uh, it turns out they were a little less worried about lifting up the sod than we were.... 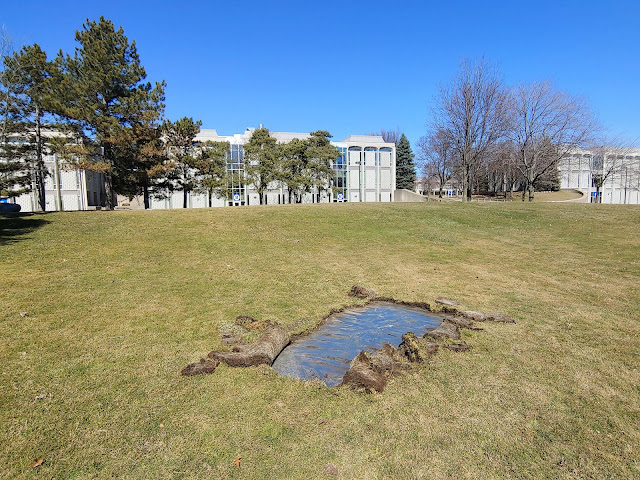 Whoops. Well, we started it. Not wanting to leave such a raggedy-looking scene for too long, Michel and I agreed that we ought to clean it up as soon as possible, and returned the next day with the necessary supplies. We managed to get 45 minutes or so of work done before our progress was halted by persistent rain. We left feeling satisfied that we'd done a decent thing for the art, the artist, and the campus community, but once again, we felt eager to get back soon to complete our act of homage/guerrilla restoration.


In the intervening time, of course, COVID-19 has ravaged metro Detroit, all of Michigan has been placed under a shelter-in-place order, and we have only occasionally strayed even a couple miles from home to take care of necessities.

We're fortunate, healthy, working, grateful. As we settle into our new domestic routine, weathering the emotional turbulence that each week (and each new news item) brings, I observe my mind's eye returning, often, to the peace and stillness of Glacial, which, it turns out, is a kind of reflecting pool. 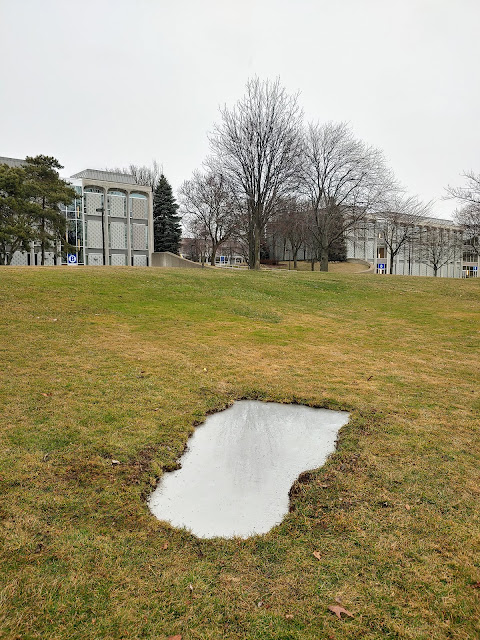 I think of the friendly connection with a stranger that our act of excavation precipitated (the best and highest use, you might say, of a work of public art). Of Ivy Sky Rutzky's long view of the land where she left her subtle mark, carved millennia ago by roving, mile-thick glaciers whose meltwater comprises the Great Lakes system we're all part of here and through which we are linked, via the St. Lawrence Seaway, to the Atlantic. (Rutkzy herself traced an Atlantic path from Detroit, decamping for New York at some point, where her work continued but, like that of so many artists of her generation, seems now to have mostly slipped out of sight through gaps in the web.) Of the abiding pleasures of landscape art and the wonder of ecosystems. Of inept stewardship and long-lost balance.

I picture Glacial, partially present yet still mostly unseen (except perhaps by the occasional dog walker—I picture one in particular pausing to admire it as he passes). Reflecting sky, tree, bird, beast.

I look forward to returning, to finishing what we started.

Posted by Matthew Piper at 9:52 AM