I want to remember how sunny it was in Detroit today, the day after Inauguration Day, like how it was sunny for days in November after the election was called. 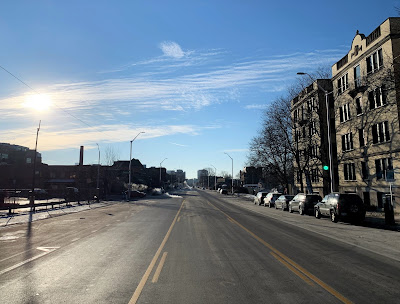 We did it! The American people (the states!) stood up to the first demagogue ever to reach our highest elected office, and despite his best efforts to hold onto power that was not his, we sent him packing!
We withstood four tragic years of his lies, his distortions, his vacuity, his racism, his hatred, his insults, his cult of personality, his brokenness, his assaults on our institutions, his inability to lead, his crisis mis-management, his illiteracy, his TV-blinkered worldview, his mob boss MO, his callousness, his awful, petulant sneer, his "man of the people" shtick, his norm shattering, and we said NO! That's enough! I didn't expect it. I was ready for four more years, seeing (haunted by, terrified of) the hold he has over so many Americans, the way they'll follow their stupid real estate developer TV character president to Doomsday gladly, if it means they get to feel like part of something bigger than themselves.
But I was wrong—we did it! I'm proud of us. Proud of the people, proud of the states, proud of the elected and election officials of both parties who held the line and said no to his bottomless barrage of bullshit. (Although, let's be clear, it took the Republicans long enough....) I am proud of our institutions for withstanding the assault. Look at our system, working! It's actually kind of dazzling.
The light saturating Detroit—the Arsenal of Democracy! Black city, worker city, city of protest—feels like a blessing, feels to me like healing, like a beginning. (Is it sunny where you are? Are you also surprised to find yourself feeling physically lighter today, like you've shrugged off something heavy and horrible?)
But it also feels like the light of revelation. To be honest, I never really thought it could happen here; I never thought we'd get this close to despots and armed, raging nativist masses. Here in my loving urban bubble, I thought (against, let's face it, so much evidence to the contrary) that we were better, stronger, smarter, surer of our ideals. But now I understand that we have to watch out, forever. (And fight, forever?) I get it. Because millions and millions of people are still living in a different reality, waiting for the next savvy cult leader with a big enough brand to fan the hate and whites-only entitlement that's smoldering within them.
I think I see better who we are now, with 45 just in the rear view. When the storming of the Capitol happened, everyone in a position of power said, "That's not us! That's not who we are," and maybe they have to say that, in an attempt to speak the reality they hope for into existence. But of course it's us. It's the worst of us, and it's been waiting for someone like 45 to let it out. And now it is out, naked and hideous in the light. (Contrast, if you will, with Gaga's giant gold dove brooch, scintillating in the sun.)
Well, here's to the light of knowing AND the light of healing, of optimism and of realism. We did it! Well done. Let's soak it up! And let's keep doing it.
Posted by Matthew Piper at 2:45 PM No comments: