It's been eight days since the Detroit production of Bliss, the titanic performance installation staged by Michigan Opera Theatre in the ruins of the old Michigan Theatre, and here I am still bobbing along, lifeboat-like, in its wake. 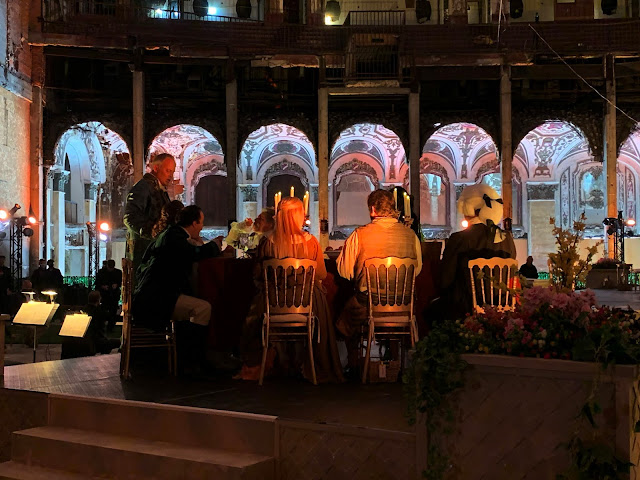 Somehow I did not expect this. Going into it, I did have the feeling that I would probably love the experience of attending Bliss, a twelve hour opera event originally conceived by Icelandic artist Ragnar Kjartansson, in which three sublime minutes of music from the conclusion of Mozart's Marriage of Figaro—the moments when a count publicly asks his wife's forgiveness for attempting to seduce a servant and, much to their community's joy, she grants it—are repeated over and over and over again.

If this makes the performance sound static or dull, it wasn't. The staging of each three minute cycle varied, subtly or dramatically, from the one before it; the light changed entirely as day turned to night; and sometimes there was dancing. The audience, meanwhile, was invited to come, go, and move around as we pleased. With audience and production ever in flux, there was a sense of constant renewal and change against the perpetual backdrop of the music.
I expected to love all this because one the roles I am happiest to play in life is that of audience member. I am, let's face it, a performance junkie, and a complete sucker for so-called "durational" performance experiences (experiments when live, time-based art and staggeringly athletic endurance meet), not to mention a wannabe opera queen and fairly avid explorer of Detroit's ruins, back in the day. This one, in other words, had Matthew Piper written all over it. It's the kind of thing I would have traveled to see—only I didn't have to.
And I did love being there. It was the tops—one of my all time great performances. I was immersed in Bliss for about five hours, all told, with a short break for a walk around the block and a longer one for dinner and more art (during which I nevertheless felt tugged, insistently, back to the theatre), and my experience was everything I hoped it would be: overwhelming, surprising, dreamlike, joyful. Ecstatic. Intoxicating. 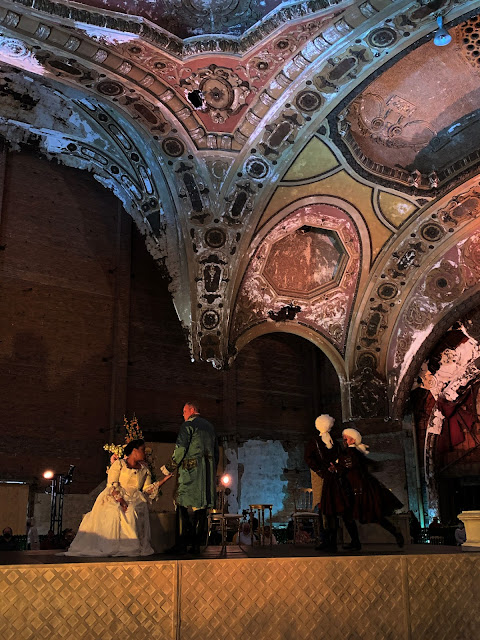 But I didn't expect it to create the conditions for these feelings—this bliss—to persist, to reverberate, to be carried with me out of that vast, magic chamber into the corners of daily life, for days. In the time since Bliss, I have found myself dancing my way through public places and bursting into laughter for no particular reason. When I return to the production in my memory, as I often do, I can’t help but feel an immediate onset of peace. When I take a few minutes to re-watch the short videos I made, or listen to a recording of that soaring music again, I sense a sudden thrill, a surge of energy and emotion that felt, the first couple times I experienced it, surprising in its force.

More generally, I have felt, in ways that aren't necessarily easy to put into words, more at ease, more relaxed, more inspired, more myself. Less clenched. I have the sense of having unburdened a certain amount of weight I've been carrying this summer, this year, this pandemic. I'm operating from some new baseline of contentment. This can't last, of course, and every day I can feel the distance between that time and the time I'm in grow a little wider, but for now, I'm living in it, I'm looking at it, and I'm feeling profoundly grateful for whatever on earth Bliss did to my brain. (Honestly, someone should do a study.)

But so what? you might reasonably ask. So what if I'm over here feeling blissed?

Well, I've been thinking about that. By making the decision to stage Bliss at the Michigan Theatre, one of Detroit's most well-known ruins—a once glorious palace that was infamously converted into a parking garage in the 1970s—MOT's new artistic director Yuval Sharon had a stroke of genius that I think accounts for some of the work's peculiar punch. This was not merely an exciting, dramatic, eminently Instagrammable backdrop for Bliss (though it was that, too); it was an opportunity to place the production's theme of forgiveness in a particular local context to profound effect. 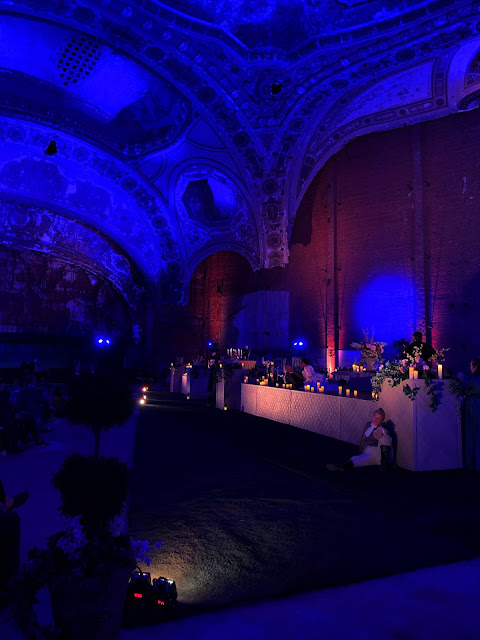 In his brief but trenchant program notes, Sharon notes that the repetition of those three minutes is Kjartansson's way of suggesting that forgiveness is itself a durational experience: "a marathon, not a sprint." A process, not an event.

By staging his Bliss in the Michigan Theatre, Sharon granted Detroiters and suburbanites alike an opportunity to embrace one of the City's ruins in a way that no major arts organization has done here, as far as I'm aware—to inhabit it, to look right at it, to be in it, to wonder in it, not to avoid it or shake our heads sadly at it, or even objectify it in that way that ruin porn is criticized for doing. The audience became part of that place, or rather we were given the opportunity to accept that we are a part of it, and that it is a part of us.

We were invited, in other words, to engage in a process of forgiving the City for its failures, of which the Michigan Theatre is a particularly vivid example. 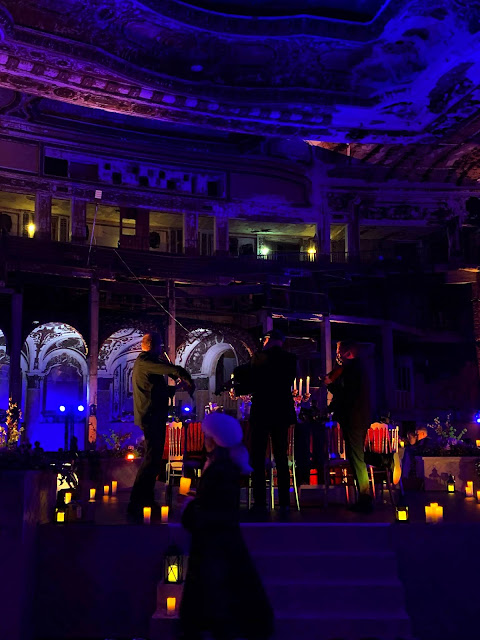 On one hand, there is a civic dimension to this, in which the individual audience member could be said to have been invited to forgive "the City," writ large, for the grievous sins the Michigan Theatre represents—racist disinvestment, decline, and disrespect, auto-mania, forgetfulness, self-sabotage...the list goes on.

But then again, as several wise Detroiters in my life have asked to powerful rhetorical effect, who is the City if you're not the City?

There is a deeper level here, where the City is not some historical abstraction but the people in attendance. I think Detroit's Bliss gave audience members the opportunity to forgive ourselves; that's why I've been floating through my week. That's why it matters.

Every day today, we are bombarded with evidence of our failures. On social media, in the news, we are confronted with an endless litany, a barrage of failure: our failure to protect the natural world we fail to remember we're part of, our failure to get along, our failure to protect and care for the most vulnerable among us, to respect one another, to connect with and learn from each other, to separate fact from fantasy.... We live in a world of failure, now. It is inescapable, irrefutable.

In Detroit, perhaps more than in many other places, we are somewhat used to inhabiting a landscape of failure. We cannot help but be reminded of our collective carelessness every time we leave the house, by every closed library and abandoned school, every gutted, treeless expanse, every parking lot where a building used to be, every residential neighborhood situated near a toxic industrial facility or ripped in two by concrete conduits for cars, and the reality is that daily life in this nearly unremitting chaos takes a psychic toll. How could it not? 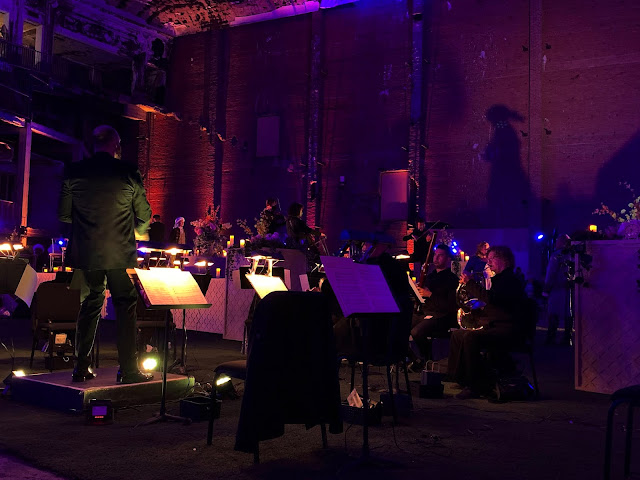 Bliss offered its audience no solutions to our endemic problems. Instead, it gave us, briefly but penetratingly, a large measure of redemption and grace that we desperately need in our ruined, wasted world. This is akin to the kind of regenerative grace we might otherwise find in nature or in community, compressed by art's magic into twelve hours that gestured toward the eternal. Through its repetition, its beauty, its sensitive siting and its scale, Bliss gave us a useful tool we could carry with us and share, a device for remembering and accessing peace when we need it. And it left us rich with the real fruits of forgiveness: a shift in perception, a new frame of reference, a much-needed chance to begin again.

Posted by Matthew Piper at 11:32 AM No comments: